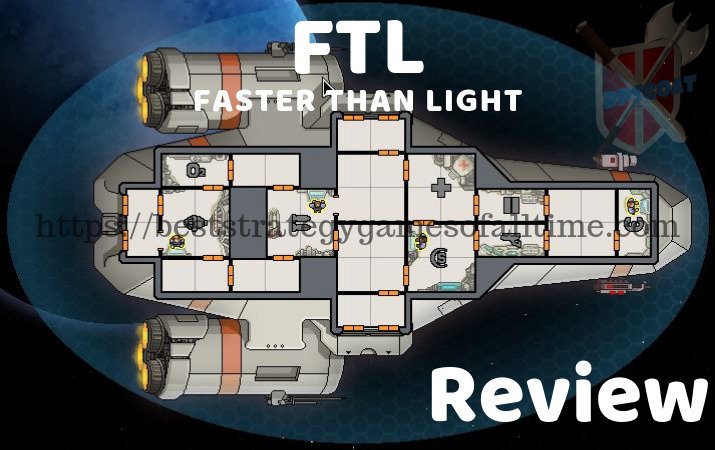 The Faster Than Light Game deserves a review; since the game play is pretty decent and it is one of those marvels that proof you do not need breath taking graphics and brilliant animation to have fun.

Also the fact that I rarely play single player games and yet FTL: Faster Than Light persuaded me to have a look and I actually enjoyed it.

Your mission: Deliver secret documents to the Federation and keep it from falling into the hands of the rebel fleet that homes in on the valuable documents location every passing second.

Command your limited crew with a fast but ill-equipped space ship as you travel through the unknown of space. Encounter alien races and monsters, make friends, upgrade your ship, obtain new space ships and defeat enemies while staying ahead of your pursuers.

How will your story unfold and can you complete your mission before it is too late?

Get FTL: Faster Than Light Here

FTL: Faster Than Light (to my mind) is a real-time, spaceship simulation, role-playing strategy game and developed by Subset Games in 2012.

FTL sports 2D pixel-art, not a whole lot of animation, skill does not play a major role and no mind-blowing sound effects although the music is pretty good. (I will leave some samples below for you to listen too.)

With that said: How does the FTL: Advance Edition end up on my top strategy game list?

Addictive fun is where it is at and my absolute must for any game. Anything else is a waste of time.

The Faster Than Light game was released on Windows, OS X and Linux in 2012. The well-received game and positive feedback resulted in further development of the game where Subset Games worked on FTL: Advanced Edition in 2013.

FTL: Advanced Edition was released as a free update to owners of the original game in 2014. The advanced edition introduced more events, ships and game elements. A separate release was also done for the iPad which worked very well.

It makes sense to only play the advanced edition for the best experience. It is a free update after all. I am sure that by now everyone that bought the original game has updated to FTL: Advanced Edition.

One of the features, I believe, that made this game a success is its replayability.

FTL: Faster Than Light sports a random map and events generator which gives the game great replay value. Where some might push to win the game, I see FTL as my go-to game to unwind for 15 to 30 minutes.

I love the random story as I explore the unknown in an attempt to stay ahead of the rebel fleet.

As stated before: FTL: Faster Than Light is a top-down game with its 2D pixel art giving it a retro look.

The complexity of the game is a welcome surprise and you really feel like you are in command like a Captain Kirk commanding one of the Star Trek fleet ships.

You start a new game with the Kestrel but of course you can give it any name you want and also change your start-out crew member’s avatars and names.

There are eight different playable species and ten ships that can be unlocked in total.

Like all strategy games there must be at least one resource and the resource for the Faster Than Light game is Scrap. Scrap is the currency used to upgrade all aspects of your ship.

There are different rooms on the ship and some needs to be manned by a crew member in order for it to use a specific function. For instance: You need a crew member piloting the ship in order to use the jump drive.

You use the map to choose the next sector to jump to with the goal to reach the exit. This does not stop you from exploring more of the map as long as you stay ahead of the rebel fleet that approaches and are indicated by arrows in the top left.

Each system on your ship requires energy and this energy needs to be managed between all your systems which can be tricky at times and adds to the fun.

There are also Sub Systems that do not require any energy. An example of this are doors and sensors. Yip. You can even control individual doors.

This is the very basics of the game.

The music soundtracks for FTL was done by the American composer Ben Prunty and I truly enjoy them.

There are 29 sound tracks created for the FTL game in total of which roughly half are dedicated to combat and the other to exploring.

You can judge for yourself and listen to some samples below:

Looks can be deceiving and FTL is proof of this. I find the game enjoyable and exciting.

It is hard for me to say anything negative about the FTL game. When playing it for long periods of time and especially if your aim is to win the game, it may become a bit tedious and monotonous.

Great fun is to be had on the other hand if you simply play this game for fun and watch your story unfold.

If you haven’t yet gave this gem a try, you should. I am sure you will enjoy this too.

It is an inexpensive game that doesn’t require a big rig to play on or massive hard drive space and it delivers on fun and value far better than many AAA games.

The aim of my Faster Than Light Game Review is to give those of you some insight to the game and my honest experience. If, however you have some questions or want to share your experience of the Faster Than Light game, please do so in the comments below.