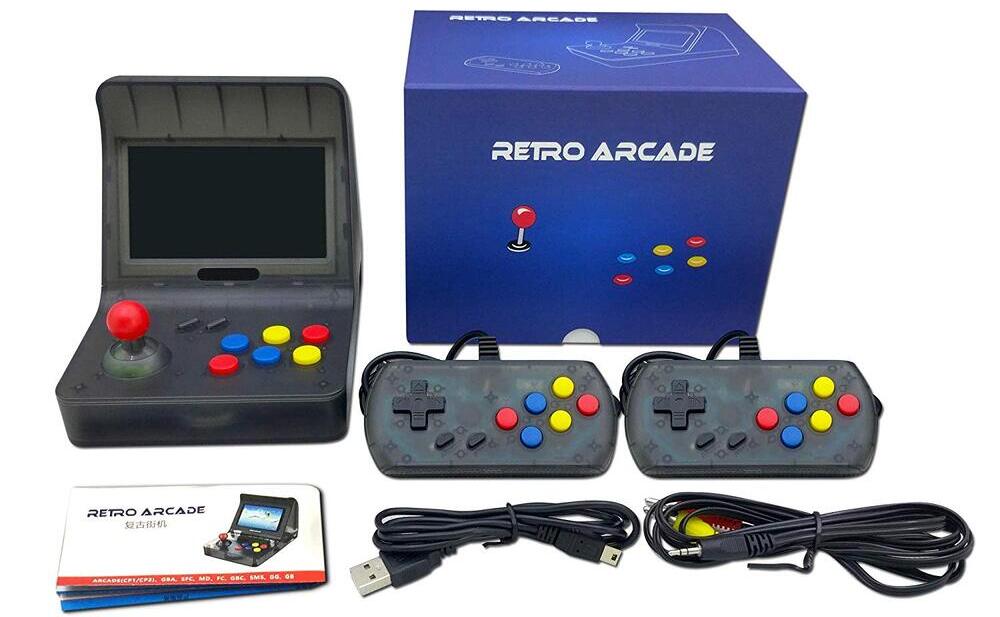 Below is a list of video game consoles in no particular order. I think they are all fun with a console to fit each user’s needs.

Perhaps you need a multi-purpose console for streaming, handling other input devices and keeping you up to date on social media while others may want a console soley for gaming purposes.

Gaming interests may vary from person to person or even the way you would like to play a game. Whether you are into mobile games, retro games or playing games on the go; there is a video game console for you.

So without further delay, here is a list of video game consoles that I deem worthwhile purchasing:

This Retro Game Console have 3,000 classic arcade games from the 80’s and 90’s crammed inside. Titles include Pit Fighter, Street Fighter 2, Final Fight and many more.

What is more: It is portable so you can relive those good arcade memories wherever you go.

The Nintendo Switch is portable and a very vesatile device. You can hook it up to your TV and then seamlessly carry on playing your game wherever you go by undocking it and taking it with you.

There are some big titles you can play like: The Witcher 3, Super Mario Odyssey, Marvel Ultimate Alliance 3, Overwatch, Torchlight 2 and more.

It is possibly the best handheld and portable gaming console ever made so far.

Play games on the move, hook it up to your TV, play online games and play with friends.

Get Yours From Amazon

The authentic 90’s look and feel will bring back fond memories.

Instead the NVIDIA SHield is an excellent media server and capable of 4K HDR quality streaming. Whatever your streaming needs, the NVIDIA Shield will be able to deliver. Whether streaming a game from your computer or streaming Netflix or Hulu.

You can control the console through Alexa using your voice and hookup any Bluetooth controller or programmable universal remote.

This small device will blow you away with its capabilities as well as acting as a smart home hub.

What makes the Nintendo Wii different from the other gaming consoles is that it exclusively plays motions games.

The most popular game series of the console is arguably the Mario titles. Whether Mario Kart, Super Mario Bros. or Super Smash Bros.

Like all other motion gaming consoles and implementations on other gaming systems (like the Playstation adn Xbox), this seems to be declining in popularity which is a pity as I do enjoy these games quite a bit.

The Wii uses a motion sensor bar and comes standard with a wand-like Wii controller that uses internal gyroscope and accelerometer technology to pinpoint the players movements.

The Nintendo Wii cannot play DVD’s or Blu Ray discs but it can connect to your network via WiFi for online gaming.

Get The Wii Here

This is the Xbox One Slim 1TB gaming console. It is called ‘Slim’ because it has a bigger brother that is a bit bulkier but very powerful which I believe is called the XBOX One X.

Even if this is the baby brother it is a brilliant console. The Xbox One is up my ally with brilliant sound, fantastic grapichs and exellent streaming capabilities.

Yes, the Slim can produce 4K resolution but it is not a true 4K capability like its big brother can handle. The XBOX One X possesses graphical prowess that will make your eyes water; clocking in at 6.0 TFLOPS versus the Slim’s 1.4 TFLOPS.

For the price difference; I would stick with the XBOX One S for now. It may be a while before the raw power of the XBOX ONE X can be put to good use.

The Xbox also sports with one of the best game controllers you can fit in your hand.

Another great feature of the XBOX One is its HDMI input meant to connect your cable TV to so that you can play games while watching TV. The cool thing is that there is no limit to the signal it will accept.

So if you want to plug your Playstation 4 in there, then go ahead and you can play split-screen on both consoles through one output (like your TV).

Why not try your Roku, Apple TV, your XBOX360 or even your computer and simply use the snap capability to view both the devices output on one screen.

Get The XBOX Here

The Sony Playstation 4 1TB Slim is depicted in the picture above which implies that there is a bigger Playstation out there and indeed there is. It is called the Playstation 4 Pro and it is a beast.

Like the XBOX One, the Sony Playstation 4 also integrates with your entertainment system; offering the best in TV, Gaming, Music and entertainment.

The game controller has a touchpad for touch interaction which I do not believe has much of a use yet. (To my mind anyway) The controller charges through a USB cable that you plug into the console.

Get Your PS4 Here

So these are the 7 gaming consoles I will spend money on. Each one is unique. Some in purpose, some in design and some in capability.

I know what my first choice would be and it is not neccessarily for the fun, but the practicality of it all. My fun choice would probably be the Retro Arcade as that is the era I grew up in.

What do you think? Is there perhaps a fun gaming console you would like to add to the mix. Simply let me now in the comments below.